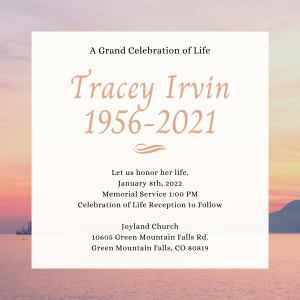 Tracey Janiak Irvin, 65, of Divide, CO died Sunday (Dec. 5, 2021) at U. C. Health Memorial Center in Colorado Springs, Colorado.  She had been hospitalized for a week due to complications of Covid-19, before joining her heavenly Father.

Tracey was born June 18, 1956 in Kankakee, Illinois, to Raymond A. & Audrey J. M. (Philipp) Janiak.  She graduated in June 1974 from Perrysburg High School in Perrysburg, Ohio and in 1979 from The Ohio State University in Columbus, Ohio.  She graduated with a B.A. degree in Home Economics with a specialty in furnishing and sewing. She taught Home Economics in Columbus high school for several years.  Her custom-made curtains and draperies adorned her homes and those of friends and family.  She and her former husband, W. Ross Irvin, opened “Penguin Crossing,” a Bed and Breakfast in Ohio.  She enjoyed decorating the guest rooms and serving her gourmet breakfasts to their guests for several years.

She moved to Divide, Colorado in 2006 where her two sons later joined her. While in Colorado, Tracey was licensed and ordained as a minister of the gospel of Jesus Christ. Over the years she faithfully served in various leadership roles as a worship leader, prayer leader, K-12 Christian School Principal, and RMR Facilitator at Prayer Mountain Church, Creation Sciences Academy and Emerge School of Transformation. Tracey was known by all as an example of God's unconditional love and kindness. The lives that have been impacted by her life and ministry are too numerous to mention here. She was also a member of Joyland Church in Green Mountain Falls.

Left behind to mourn her are her two, beloved sons Joseph (Joe) R. Irvin of Divide and Jacob (Jake) P. Irvin, his wife Beth of Colorado Springs and their son Timmy.  Another grandson is due in February.  She is survived by two sisters, Kris Philipp of Kentucky and Jackie (Steve) Wyandt of Illinois.  She also has many friends, nephews and nieces.

She is preceded in death by her parents of Omro, Wisconsin and two brothers, Kenneth (Doris) Janiak and Andrew Janiak.

To send flowers to the family or plant a tree in memory of Tracey, please visit our floral store.