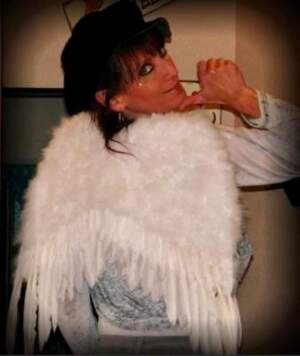 Sheila Ann Wolfe of Woodland Park Colorado died May 16th 2022 at her home. Sheila passed peacefully next to her husband Tod Wolfe and 2 dogs Tucker and Cooper while sleeping due to heart complications.

Sheila was born in Fall River Massachusetts on March 5th1968 to Robert “Bob” and Madeline “Madge” Raposa. Sheila was the middle child of 2 sisters Charlene Raposa and Shelly Raposa whom she shared a very special bond with. Sheila spent much of her childhood years as a military brat and saw the world while her father Robert was serving as medic in the US Army. The Raposa family settled in Colorado where Robert Retired at Fort Carson near Colorado Springs. Sheila graduated from Fountain Fort Carson Highschool in 1986 and  found her passion by working as a CNA at a local retirement home. She also worked as a waitress at Red Lobster in Colorado Springs.

Sheila made a life changing move in 1992 and voyaged off to Alaska. In April of 1993 Sheila met the love of her life Tod Wolfe. Tod was an airman stationed at Elmendorf AFB. Sheila and Tod were married in 1995. Sheila flourished as she pursued her love of taking care of our elderly. Sheila opened her own assisted living facility in Chugiak Alaska “Bear Mountain Manor” where she and Tod lived. Sheila and Tod soon moved to Eagle River Alaska and brought Bear Mountain Manor along with them in 1999. In 2000 Tod separated from the Air Force and continued on the journey with Sheila pursuing her dream of running her own business. Sheila and Tod left Alaska in 2013 and closed the doors to Bear Mountain Manor to be closer to Sheila’s parents as her father had fallen ill.

Sheila and Tod purchased a home in Woodland Park in 2015. Sheila continued her love of taking care of the elderly when she became a driver for Teller County Senior Coalition. She soon was working with various seniors throughout the region taking care of their daily needs.

Sheila touched so many lives and was a savior to many. Her selflessness could not be compared. Sheila unfortunately passed away in her sleep by her husband’s side along with her beloved dogs Tucker and Cooper.

A Celebration of Life will be held May 28th 2022 from 12:00-2:00pm. At Memorial Park in Woodland Park Colorado, Dress will be casual or your favorite Bronco gear is preferred. Celebration will be pet friendly, use your discretion. There will be a donation box at the event if you wish to donate to the family. You may also donate to the Memory of Sheila to TCRAS animal shelter @ https:// www.tcrascolorado.org

To send flowers to the family or plant a tree in memory of Sheila Ann (Raposa) Wolfe, please visit our floral store.

A Memorial Tree was planted for Sheila