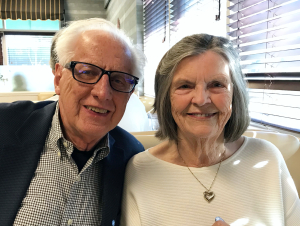 He was born on December 3, 1936 in Leavenworth, Kansas - the eleventh of twelve children – to Peter and Frances Grace Christy.  His father immigrated from Denmark and was a proud US Army Veteran with service in the First World War.

James (or “Jim” as he was known to most) graduated from Leavenworth High School and knew early that God had called him to minister to others.  He attended the Nazarene church in Leavenworth, which led him to attend Bethany Nazarene College in Bethany, Oklahoma, where he received a Bachelor of Arts in Theology.  After college, he attended the Nazarene Theological Seminary in Kansas City, Missouri to further pursue his calling of becoming an ordained minister in the Church of the Nazarene.  (While at Seminary, he supplemented his income with part-time work as a courier for the Federal Reserve Bank of Kansas City.  He liked to tell stories of walking down the street with million dollar checks in his coat pocket – saying nobody would ever suspect him of having even one dollar!). Years later, he received his Doctoral degree from the Nazarene Theological Seminary – the first to do so – and continued education in post-doctoral studies at Iliff Theological Seminary in Denver, Colorado.

While at Nazarene Theological Seminary, Jim served his first assignment in the pastoral ministry in Drexel, Missouri.  During his tenure at Drexel, he was ordained as an Elder in the Church of the Nazarene, officially becoming Reverend Jim Christy.  Following this assignment, Reverend Christy took responsibility for pastoring the Nazarene church in Kimball, Nebraska.

While in Kimball, a colleague, Rev. Norman Bloom, introduced him to a charming nursing student from Hastings, Nebraska.  After a careful courtship of over a year, on July 27, 1962, Rev. Christy married the love of his life, Velma June Snodgrass in Hastings, Nebraska.

Reverend and Mrs. Christy embarked on a life of ministry that would span 60 years – spending seven years as a pastor in Rochester, Minnesota followed by 26 years in Greeley, Colorado.  He continued his service as an administrator for the Church of the Nazarene in Colorado until he retired in Divide, Colorado.  He was a member of the Woodland Park Church of the Nazarene.

His humble and faithful service was an inspiration to so many people and reached across the spectrum of faith.  He blended a sharp intellect with a selfless sense of reality to make a meaningful difference in countless lives.

A Memorial Service will be held at 10:30am on Monday, August 29 at the Woodland Park Church of the Nazarene in Woodland Park, Colorado.

To send flowers to the family or plant a tree in memory of James Thomas Christy, please visit our floral store.

A Memorial Tree was planted for James